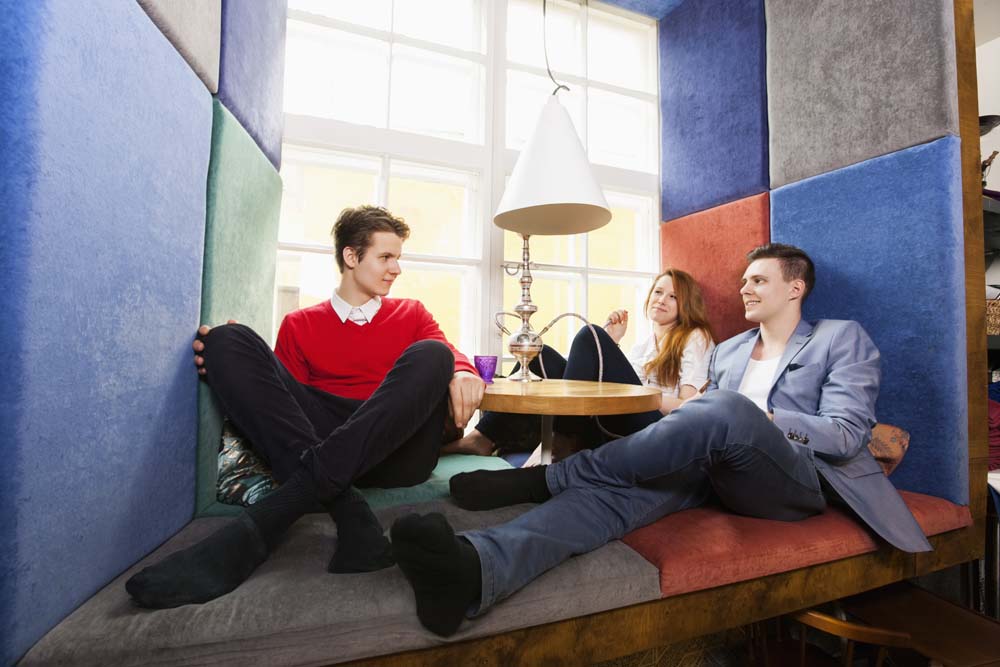 Shisha is usually taken a group, whereby a single mouthpiece is passed from one person to the other. Water pipes are used to prepare specially designed tobacco, which is usually seasoned. They are also called a number of different names, including hookah, argileh, shisha, Hubble bubble and Goza. Tobacco is no less toxic in a water pipe like a cigarette, and the water in the water pipe does not filter the toxic ingredients in the tobacco smoke. Water pipe smoking can actually inhale more smoke than cigarette smokers due to the large smoke that breathe in the smoke session which can last as long as 60 minutes. So forget the myth that hookah is less harmful than cigarettes, the best thing for your health is to stay away from both Hookah and cigarettes.

Inhalation can cause excessive coughing or spit, and coughing can also occur if someone is blowing smoke on the face. The World Health Organization said that smokers tend to smoke until they meet their needs and know when they have to stop in order to avoid nausea. Water pipe has more nicotine,  this can cause a person to smoke and does not know when to stop as it turns addictive. This can lead to abdominal pain or nausea.

Irritation caused by exposure to tobacco juice increases the risk of developing oral cancer. It is likely that shisha will get more effects than cigar smokers or those that use water pipe. Coal, which is used to heat tobacco in water pipes, increases health risks. Even after passing through water containing smoke produced by a water pipe, high levels of toxic compounds, including carbon monoxide, heavy metals and carcinogenic chemicals. Tobacco and smoke pipe contains many toxic substances, which are known to cause lung, bladder, and oral cancer. A typical one hour session of smoking water pipe makes the user 100 to 200 times the volume of smoke from a single cigarette

Smoking can reduce the levels of sex hormones in men and women. This can cause a decrease in sexual desire. For women, it can lead to sexual dissatisfaction which is as a result of reduced lubrication and achieving the ability to reach orgasm becomes impossible, this is hell to actually go through this if you are a woman why subject yourself to such form of torture that you can just easily avoid by ensuring you are not using Hookah. While in men, this can reduce sexual performance, which then again brings another problem to a man. With low performance you will lose confidence and can lead to break ups among couples.

Mood swings as it affects the central nervous system (addiction)

Many believe that smoking a water pipe is much better than smoking because tobacco as the one smoked via water pipe is mixed with water. For this reason, the effect would be less for water pipe. This is a myth the truth is that the water pipe brings more side effects on your body.

Nicotine is usually very good in taste for smokers, so people find it so hard to quit smoking. Nicotine reaches the brain in seconds and makes you feel more energetic for a while. But since this effect decreases, you feel tired and hurt more. Therefore you will desire to feel the way you felt when you smoked Hookah so you will start smoking more often as to be able to maintain the feeling, without you knowing you are an addict of shisha and you cannot stop since withdrawal symptoms will prove more challenging especially if you will not have the means to seek professional help.

The development of insulin resistance

This will lead to an increased risk of type 2 diabetes and its complications, which tend to grow faster than in people who do not smoke. I f you smoke your body will develop insulin resistance mechanism this will then increase your chances of having diabetes.

Your hands and feet are not immune to the effects of smoking. Smoking increases the risk of nail fungus infections. The obvious signs of smoking are the changes in a person skin. The substances contained in tobacco smoke actually change the structure of the skin. A recent study has shown that smoking significantly increases the risk of squamous cell this cell called squamous cell carcinoma is the one that cause skin cancer. This is a serious health issue as you cannot cut off your skin or ask for a transplant to stop the cancer from spreading.

The exchange of water pipes can result in the transmission of serious infections, such as tuberculosis and hepatitis. People who smoke Hookah do share a single pipe this is too risky as there is exchange of saliva from different people and some might have cracked lips which is common among smokers since smoking causes dehydration. The cracked lips make it easy for one to get infected or even affect others if he/she has a communicable disease.

Risks for the newborn

Water pipe smoking mothers are more likely to bare children with low birth weight than women who give birth without a history of smoking. On the other hand, these children that are underweight are more likely prone to developing lung problems at their tender age.