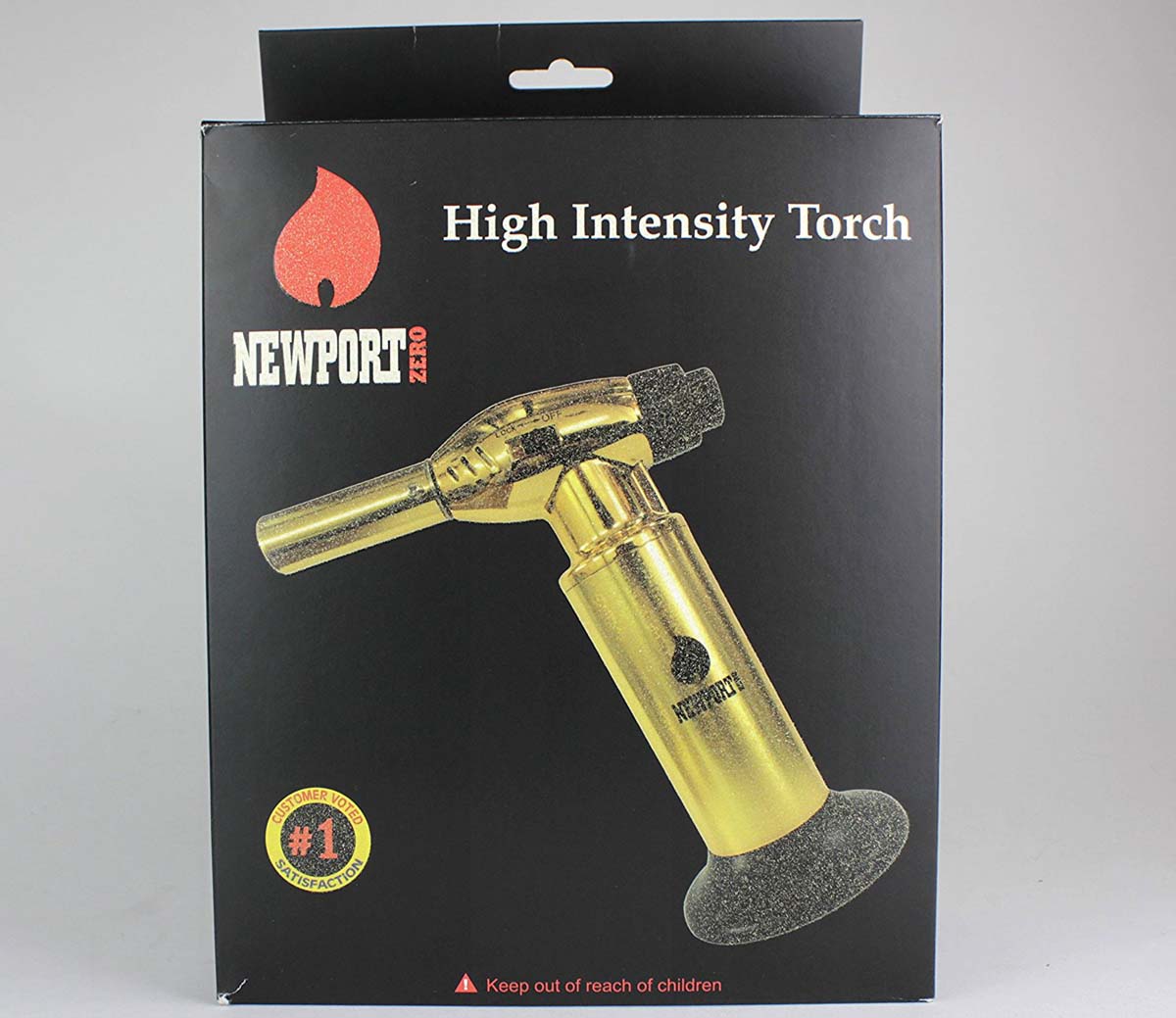 If you’re in need of a butane torch to light your cigar then you don’t need to go anywhere other than to Newport Zero. This company is a well-known manufacturer of simple, safe and user-friendly torches built to get stuff done. Newport Zero has a wide variety of top-quality butane torches of all shapes and sizes. The sizes and types of the torches they offer are:

These mini-sized torches were built for comfort. These torches range from 5-inches and 5.5-inches in height. The moderate size and weight of this torch makes it perfect for trips and home use. 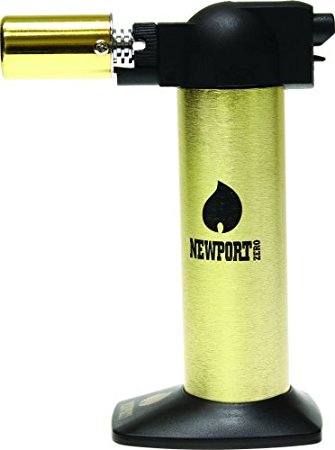 Newport Zero’s normal-sized torches are 6-inches in height and deliver concentrated heat with adjustable flame size. Slightly taller than their mini-sized counterparts, they pack an extra punch when it comes to lighting up. Its size makes it the perfect tool for taking on outings or showcasing.

The jewel of the company’s butane torch catalog is the jumbo, 10-inch tall butane torch, built for style and ultimate performance. This torch is a heavy duty camping necessity and cigar-lighting overkill. The sheer size of the tank will definitely draw eyes.

Newport Zero Pen Torches were designed for simple and portable use. These easy to use torches are pencil-shaped, one-touch operational, and the precision flame tip can burn up to 2,500°F. The piezoelectric ignition system does not require an electricity to get things started.

The fit on top torch is a simple contraption which is placed on the head of a Newport Zero can of butane gas, and has a feature to adjust flame size. These torches were designed for the casual user and come equipped with a flame-lock for uninterrupted use as well as a child-lock safety system. These tops are simply screwed onto the head of a Newport Butane can and you’re ready to start. 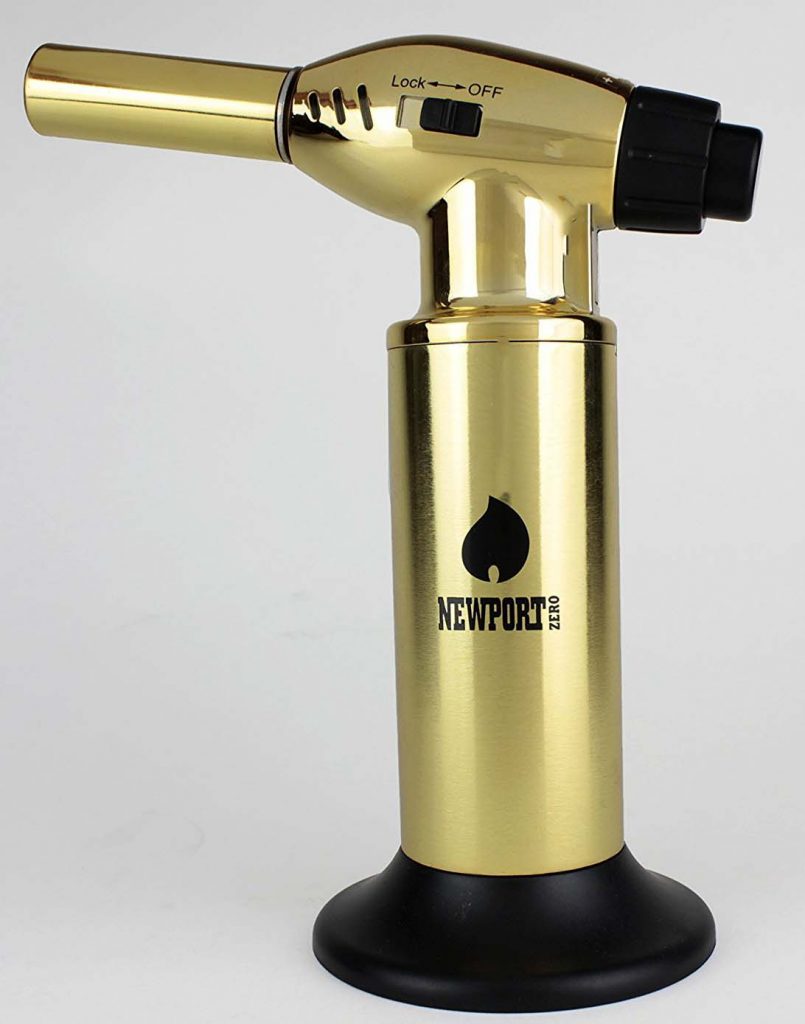 The world is saturated with tons of butane torches for lighting cigars or taking on camping trips. However, it appears that Newport Zero butane torches are easily lost among the infinite sea of torch manufacturers. There’s nothing really special with Newport Zero’s catalog of torches, but the designs and customizability are pretty fascinating.

When it comes to size, there will be people who are more comfortable with small or large torches, and Newport Zero caters to them all. In terms of functionality, all sizes perform similarly in providing a constant, concentrated flame in which to light cigars with.

If you’re looking for performance for a cigar burner, then Newport Zero’s array of butane burners is definitely worth noting. For some of their products, their torch’s flames are indeed as concentrated as the company promises, and the adjustable gas flow is easy to conrtrol. If anything, the unique designs and fancy color schemes should be an attractive enough feature to make the purchase. However, if you’re looking for value, then a regular stick match or Bic lighter can easily get the job done, albeit without the panache that Newport Zero offers.

One issue with the torch is its lifespan. Each torch comes with a lifetime warranty from manufacturer which protects the user from certain defects. However, some customers have expressed their dissatisfaction with the post-purchase services offered by the company. After “normal” use of one year, some people found their torches either leaking fuel or not turning on at all. In most cases, it’s a simple problem that can be attributed to accidental mishandling of the product, but for others the problem existed upon unboxing the torch. This just goes to show the durability (or lack thereof) of the product to withstand travel and constant usage.

Another problem found in some of the large 10-inch models is that they do not come equipped with safety lock features, allowing for a hassle-free flame. This can be considered either a pro or a con, depending how you look at it, but in the end you’re not carrying the 10-inch torch on you. However, if left in a roughly handled bag, this could cause problems as the gas can accidentally be released and sparked. Newer models of the company’s butane torches come with the safety lock system, so if safety is a priority then opt for Newport Zero’s latest torches.

Before purchasing a butane torch from any manufacturer, please collect as much information as possible regarding the product’s safety lock system. Newport Zero has active customer service reps who are eager to answer any lingering questions you may have.

Butane torches come and go, and for many it’s a simple purchase and repurchase from the same company. However, for Newport Zero, their torches don’t stand up to the hype they built. Newport Zero is definitely making an effort to enhance the quality of their products by ensuring safety lock features on their latest models, but the damage is done. These torches are perfect for single-use and maybe not even then. Mishandling of the product during shipping is a definite possibility when receiving opened boxes or missing components, but it’s hardly an excuse for the company to turn a blind eye to their shoddy materials and questionable manufacturing.

It pains me to say this but Newport Zero hasn’t fulfilled their promise. I used to be a regular with Newport Zero and bought several of their 6- and 10-inch models, but the last few buys just left me shaking my head. I truly hope that the company gets their act together (and fixes their website since the text seems misaligned in certain pages) and fulfills their promise of quality and easy use, but I’m not hopeful.