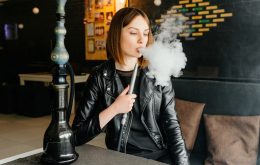 Hubbly Tobacco Smoking: Everything You Need to Know

Hubbly tobacco which is also known as hookah was introduced roughly five centuries back in the Middle East. Countries that first started using hookah are Egypt, Persia, India, and Turkey. Initially, it is believed that hookah was constructed using wood and coconut. Hookah itself was used to smoke hashish and opium at the time.

The use of hookah is still very much popular in Middle Eastern tradition. Since then, it has gained a lot of popularity around the world. You can easily find hookah cafes in the majority of countries around the world and the trend is seriously picking up amongst the youth. So what is hookah and why is it so popular?

Hookah is a pipe that is used to smoke tobacco. The pipe utilizes cold water and heat to generate smoke from the tobacco you put inside. You heat the bowl at the top and smoke is generated which trickles down to the water, which filters the smoke. As far as the tobacco used, you don’t use the general tobacco you find in cigarettes. Flavored tobacco is used and there is a wide-variety of flavors from fruit-based flavors to custom-made flavors offered by hubbly tobacco producers.

Most hookah smokers will tell you that the effects of hookah are far less than that of smoking cigarettes. There are some aspects in which hookah is slightly less dangerous than cigarettes. However, it has pretty much the same impact as cigarette smoking. The pipe delivers nicotine in the same manner that it is delivered to you in cigarettes. So you won’t really dodge the negative impact of smoking by smoking hookah instead of cigarettes.

Most smokers think that filtering the tobaccos using water removes cancer-causing chemicals but that is not the case. The smoke from hookah even though it uses water causes as much damage to both the heart and lungs. It is important to note that any type of smoke is harmful to the lungs so it is recommended you smoke in moderation.