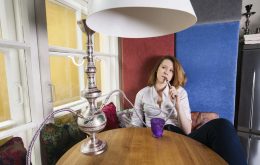 There are lots of traditions around the world and one of the most popular has become one of the favorite options to replace cigarettes. Hookah is a new way to enjoy the habit of smoking without any nicotine. Smoking cigarettes is most probably one of the hardest habits to kick and there are thousands who are willing to try any method to stop. The cold turkey method seems to be the hardest where emotions run high and people aren’t able to face their day with ease.  Lots of people have started using vaporizer pens and other forms cigarette replacement.  One of the leading causes of preventable death is smoking and people have come to realize that it is not a good habit. It is however incredibly hard to quit smoking once you have started and with the growing hookah industry smokers believe that it has become much easier for them to get rid of the nasty habit. Vendors claim that there is little to no nicotine in the products that are used which gives smokers the opportunity to become used to a habit that is far less addictive. But is it really?

When wondering and asking is hookah addictive we should investigate all the different products that are available on the market to help you quit smoking cigarettes. There are so many to choose from where in the olden days gum that contained nicotine was the most popular choice. It is no secret that the popularity of hookah has gone up quite a bit. Hookah is a water pipe that can be used to smoke an herbal mixture or perhaps tobacco depending on your preference. The pipe has a long tube through which smoke is inhaled. This form of smoking has been around for many years and originates from the Middle East. It is a form of social smoking and offers many different kinds of mixtures to use. Today you can find fruity and candy flavored options that are quite enjoyable. Click here to read more about the history of hookah.  This form of smoking has an interesting tale to tell involving ancient times and cultures that include the Persians which was an ancient race.

It is a fact that most mixtures that are used for hookah contain less chemicals and nicotine than cigarettes. There are even hookah lounges around the world that cater for the ever growing market of smokers. According to a survey hookah is actually more popular with men between 18 and 24. According to the same survey that has been conducted they have found that 17% of high school students actually smoke hookah.

Most people that smoke hookah are convinced that it is not addictive where in fact it has been proven that it is not as addictive as cigarettes.  It is said by specialists that as with any habit you need to curb how much you smoke though as it would completely defeat the purpose of trying to cut down on cigarettes and then attending a hookah session that lasts up to several hours. Experts say that it also largely depends on which mixtures you smoke while enjoying hookah. Some of the mixtures contain a large amount of nicotine which means smoking it would cause the equivalent of smoking up to 10 cigarettes per day. When going to a hookah lounge make sure to spend only a few sessions inside as you will be exposed to a lot of smoke. Take a look here at other ways to enjoy hookah at home. It is true that hookah is a great social tool and can make a party so much better but try and refrain from smoking any mixtures that has a high nicotine volume in order to really benefit from hookah.

Hookah smoking is an old tradition that has been around for over 700 years which means it deserves some respect as an option to replace cigarette smoking and with some incentive you won’t end up spending a fortune on it as you would on regular cigarettes. This once again proves that to make it worth your while to dump the cigarettes and to start hookah you should perhaps start slow and try all the different herbal mixes that are available. Find time to enjoy it and make sure that you don’t smoke too often because as with everything in life too much of a good thing really isn’t good. Young people are lured to hookah because of the social atmosphere and the fun of it and yes it would seem like a better alternative to smoking. As a smoker I remember that I started smoking for social reasons and that in the beginning it really was a social thing until I found myself unable to wake up in the morning without having a cigarette or two. I have found that smoking hookah has helped me to get rid of the cigarettes as I personally smoke much less hookah then cigarettes. I also enjoy trying out different mixtures and finding what I like the most. I personally enjoy the fruity mixtures as it really tastes and smells great and honestly I don’t feel like I have to have it as often as I used to have cigarettes on a daily basis.

The general consensus is that you can get addicted to hookah if you smoke brands that contain a lot of nicotine or chemicals and that you might also be addicted to the social environment that goes hand in hand with hookah. The best thing after all is to not smoke anything at all and to keep yourself occupied with healthier and better habits. Many smokers swear by hookah and say that they were able to stop smoking cigarettes thanks to this ancient smoking tradition. Everything is so readily available today that it is sometimes hard not to try something for the first time. It is better to find good and wholesome hobbies rather than to get lost inside a hookah den while looking for new mixtures to explore.